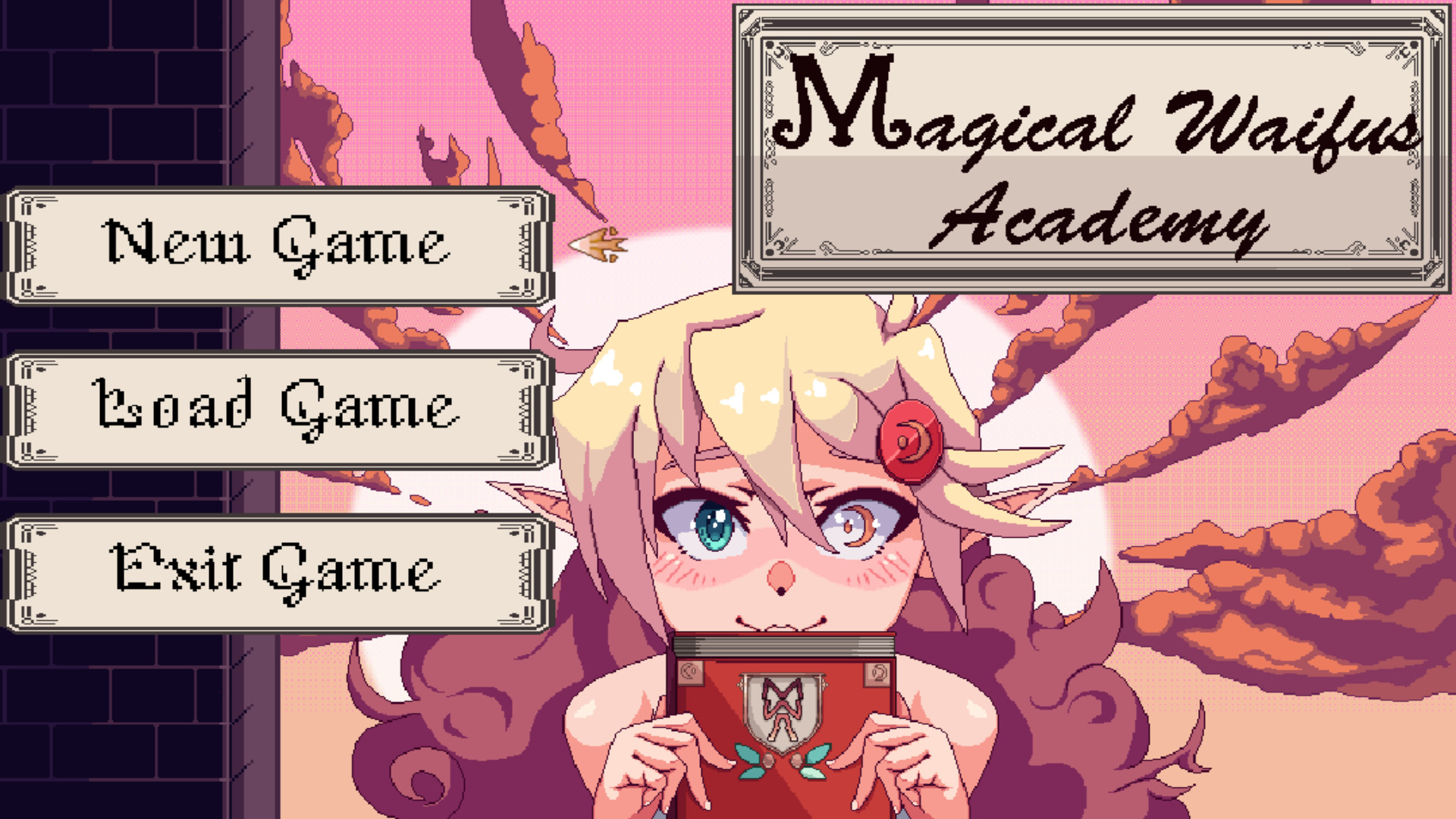 Magical Waifus Academy is hoping to lure you in with promises of monstergirl sex, but is this game enchanting or a curse? Well, the answer is a bit more complicated than all of that

The first thing you’re likely to realize is that the game has no intention of explaining the controls, which are far from intuitive. You’ll figure them out, but you’re likely to have a moment here and there where you’re utterly unsure how to do something very basic. That being said, it’s not the end of the world, just somewhat frustrating. The artwork is very retro and pixel based, reminding me a whole lot of second and third generation computer games, or the scenes you’d get on the old 3DO games. It’s a very distinct look, and while not bad by any means, you’re likely to have a very firm opinion about the choice. The music is fine, and the limited voice work is similarly fine. Nothing awful, and nothing outstanding.

The game drops you in without anything resembling a tutorial, and never really tries to teach you a thing; almost everything you learn about how the game works will be from either methodically trying everything, or by accidentally discovering it. I can’t tell if this is a deliberate choice or not. Your character is almost helpless, being a fish out of water, and the head of the academy isn’t exactly concerned with being helpful. Your familiar (the companion who enables you to cast spells) is similarly of limited usefulness in teaching you anything. So perhaps this is meant as a lazy form of worldbuilding, but it hampers the fun factor, because you’re blind through the opening hours. I literally wasn’t aware of how to increase my stats until I accidentally discovered that option on my own.

The combat is actually pretty entertaining, as you’ll have to enter key press combinations to cast spells. It keeps things engaging, which is a nice touch, especially when the enemies do a particularly lewd attack. This is the only time you’ll see any animation in the game, because the more story-based sexual encounters you have are simply a still image with some voice work. The in-combat animation themselves are well done, and the enemy sprites are a combination of charming and sexy. They’re arguably better than the art you’re going to get in the previously-mentioned stills. You can get gallery scenes with most enemies and characters, and if you view those unlocks as some sort of retro tribute to the lewd games of the 80’s, you probably won’t be disappointed. That being said, if you’re looking for hi-res lewd art, look elsewhere. Conversations with characters have a similar level of jank to them. There’s branching dialogue trees (some branches of which lead to sex scenes), but once you’ve exhausted one, you have to start the conversation over again, just like in a Siera title or vintage RPG.
The gameplay will see you travelling into various dungeons that have a roguelike aspect (the maps are random) and fighting a variety of monstergirls and dealing with their conventional and lewd attacks. Pretty much every niche in the monstergirl kink is given at least some attention here, from horny hellhounds to insatiable slime girls and everything in between. There’s also a cheat menu to basically enable you to make yourself a walking god or unlocking the gallery, or fast-forwarding the plot. This is definitely welcome if you’re finding yourself not having much fun here, and part of me thinks that the dev knows this is going to be the case with some of the fanbase.

The title feels painfully retro to a degree that’s almost actively inhibiting fun. It’s like the dev wanted the aesthetics of a pixel art adult title, but also wanted all the problems that used to come with those early games. It’s a flawed game, and at points, those flaws are pretty glaring. There’s definitely fun to be had, but you’re going to have to put some effort in, and for some folks, the effort isn’t going to match the reward. However, even at full price, the game is only $10 USD, and if you like the gameplay loop, you’re going to find more than enough value here.