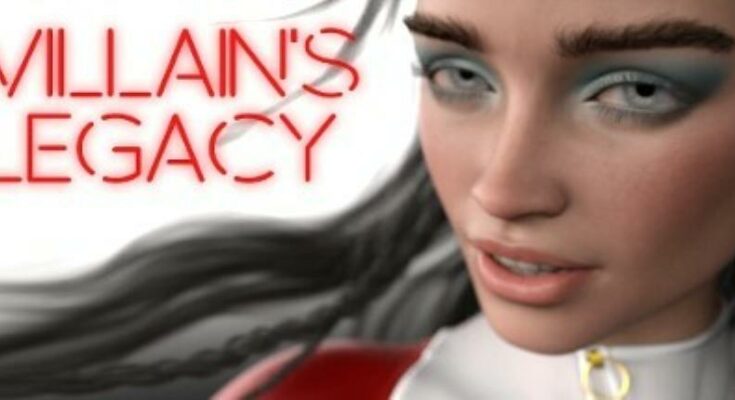 Villain’s Legacy is an adult VN that certainly isn’t afraid to show its favorite influences on its sleeve.

To get it out of the way right now, Legacy has all of the QOL stuff any fan of adult VN’s expects – gallery options, mousewheel rollback, and plenty of save slots. The characters are well done for the CGI render style, though there’s definitely points where they hit that uncanny valley. There’s also a significant presence of exaggerated and gravity defying massive breasts, along with one humongous oversized dong. Admittedly, you’re probably not playing this if realism is a sticking point, but it’s worth mentioning. There’s also a bit of animation in this one, which is always nice to see. As the genre slowly evolves, this is rapidly becoming a more common inclusion in the better games in the genre.

You play as the villain of the story, and when it begins, you are a bitter and unpleasant man. Every good villain needs an origin, and you get to see it, complete with you essentially getting aggressively cucked by your wife with a black superhero. I’m not going to moralize here, but it’s not weird if people notice the undertones of racial fetishization in the prologue. They’re very much on display, and some may find it off-putting. I’m not saying that this is intentional, nor am I suggesting anything untoward about the devs or writers. I’m just pointing it out.

The game is clearly heavily influenced by modern superhero media, like The Boys. Another scene is clearly cribbed from Injustice 2 (the Brainiac and Supergirl subplot, to be specific). This is probably not going to be a dealbreaker for you, but if you’re a fan of pretty much any recent superhero shows or movies, you’re likely to see the influences rather transparently.

The translation is really not good. At points it hits “okay”, but at others, it really plummets into awful. There are multiple syntax errors, including misgendering. Sometimes the translation is so poor that you will struggle to figure out who a character is actually talking about. I would hope that early access could lead to some translation polishing, but I’m not hopeful on that front. Admittedly, fans of adult VN’s are kind of used to this, so it’s not shocking, just a little disappointing. More of an issue is the actual bulk of the plot.

The writing is wildly inconsistent. Your character swings between being mildly contemplative and on occasion nice, then into utterly sociopathic rage without warning or provocation. Maybe this is by deliberate design (you ARE a villain after all), but it almost happens with no rhyme nor reason. In fact, everyone is a terrible person, which is probably due to the influence of the popular series, “The Boys”, but this even extends to “regular” people. Every man is quick to call a woman a slut, whore, or any number of insults with zero hesitation in public. Women are obsessed with any man’s appearance and endowment. There’s a level of base hostility going on that’s so pervasive that when you DO meet a character who isn’t awful that it’s notable. Your own inner monologue, even on your best day, is constantly going on and on about what you want to do to literally any woman who catches your eye. It leads to the problem where you aren’t given a self-insert character, and instead, you’re playing a pretty awful person who isn’t happy for more than a minute here or there. However, the game is compelling in an “I can’t look away” sort of conundrum, because you’re just curious about what level of nonsense you will spout, awful scenario you’ll engage in, or mind-meltingly bizarre thing will happen next.

The gameplay is actually somewhat innovative once you’ve passed the prologue. You’re given a world map, where you can choose to start various storylines with heroes, go to work, or commit crimes. Many of these are gated behind tech gadgets that you have to build, or your level of infamy. There doesn’t appear to be a time limit or anything like that, so you’re free to grind out something if you see fit, but everything is very easy to attain, so you shouldn’t have to.

A big point to note, however, is that this VN is not complete at the time of this review. (Dec. 19th)
The whole thing is in early access, and while it’s quite likely to be released, you will not be able to experience all of the content right now. It can be a little frustrating to find a scenario/subplot you’re actually engaged by, only to see “coming soon” when you try to continue it. On the bright side, the price isn’t going up, according to their store page, so you don’t necessarily have to feel obligated to buy in right now in the interest of saving money.