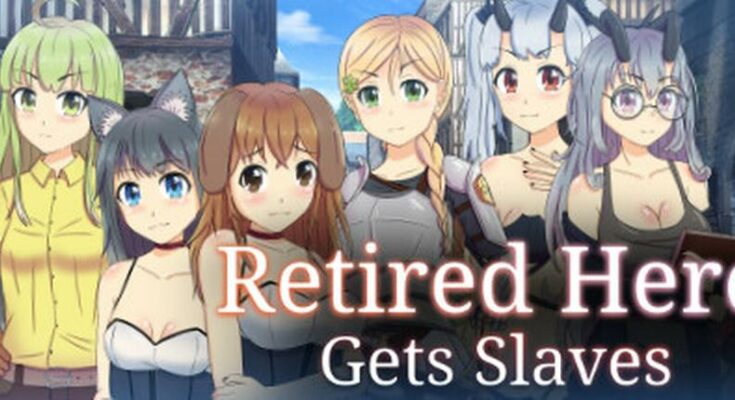 Retired Hero Gets Slaves is an anime-styled adult visual novel that’s well aware of its absurdity.
In the spirit of that absurdity, I invite you to listen to a thematically appropriate song while reading this.

Before anyone freaks out, the game has a high fantasy setting that somewhat relieves the more problematic aspects of slavery from the start. It’s worth noting that you get a catgirl and a doggirl for your slaves, so if you’re not into that particular kink, this game isn’t likely to be for you. Generally speaking, the game’s tone is more like a lighthearted fantasy series, like “Is It Wrong to Pick Up Girls in a Dungeon?” All that being said, you’re certainly given the option to treat the girls horribly, though it’s pretty obvious that the game isn’t exactly expecting you to do it.

The art is honestly not very awe-inspiring, to say the least. It’s not bad, but it’s exceedingly low detail. It’s very reminiscent of the art for the Senran Kagura series. The vast majority of faces and bodies are all exceedingly similar, created off of a template. It’s a little disappointing, but given the price point of the VN, it’s hard to really complain. It’s worth pointing out that there’s no gallery option for replaying any of the scenes, which generally aren’t animated. While it’s not really a big deal (a short game with text skipping options means you can get to pretty much any scene you might want very quickly), it’s a noticeable exclusion.

The music is decent, but it’s likely to blend into the background very quickly. There’s nothing truly memorable here, but it’s nice to have, particularly in the absence of voice acting. The writing is error-free, and clearly was translated or written entirely by a native speaker. This makes sure that all of the jokes land, and it’s very appreciated.

As far as playtime goes, you’re looking at around an hour on your first run, then significantly less on subsequent playthroughs, due to text skipping. Obviously adjust it depending on how quickly or slowly you read. The plot REALLY speeds by, and while I think it does a good job in regard to trimming the fat, I wouldn’t have minded a bit more interactions in the chapters, because the characters somewhat ended up being rather forgettable once they were out of a scene. However, these are all really minor complaints. I enjoyed my time with this one. It gets a solid B rating. For $3 USD, you could do far worse.

CLICK HERE TO BUY RETIRED HERO GETS SLAVES ON STEAM