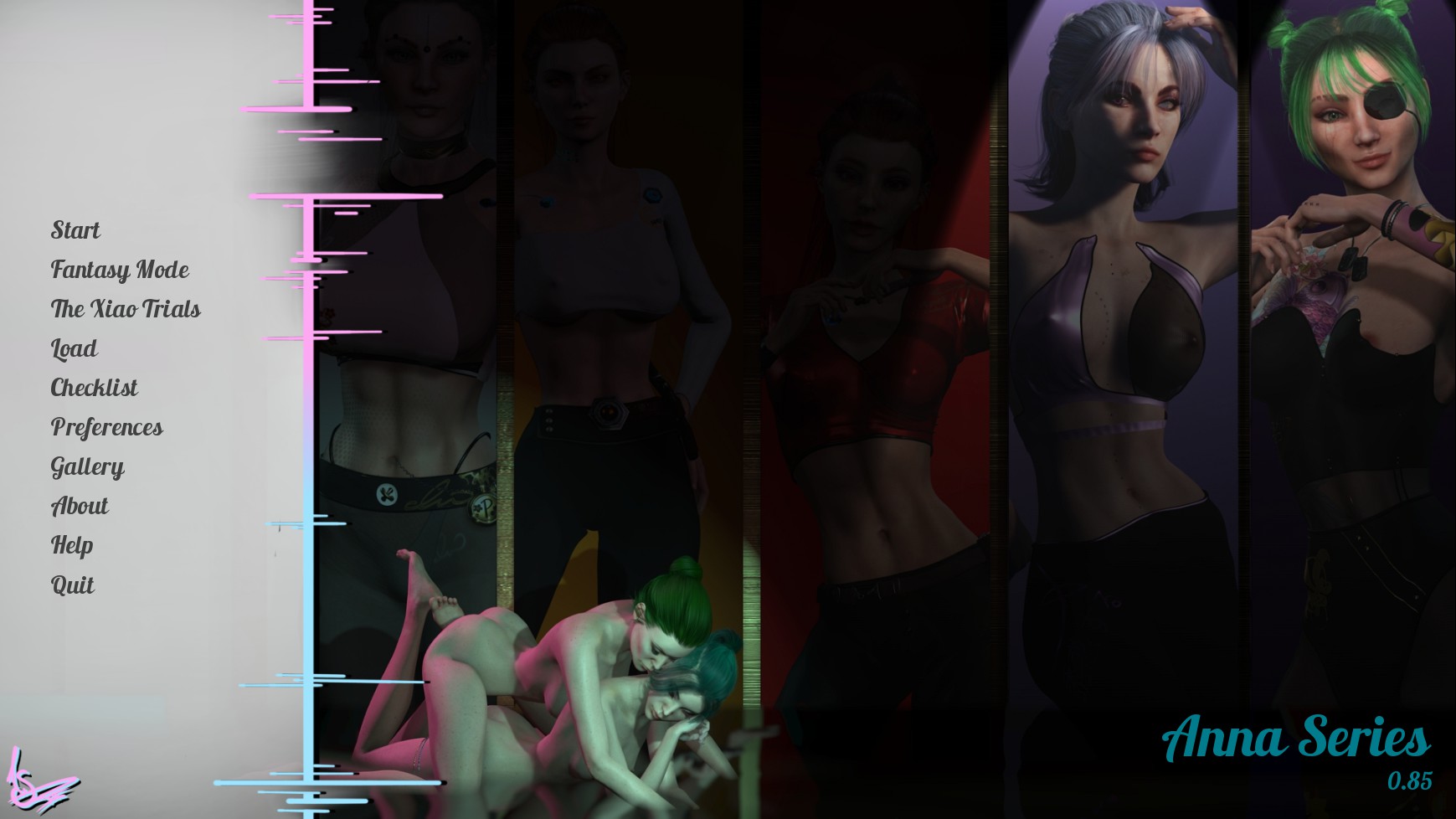 Anna -The Series Test is a dark sci-fi mystery filled with branching narratives, multiple endings (including “true” paths), and plenty of casual nudity and sex.

First and foremost, the art (and particularly the girls) is all exceedingly well-done and attractive. There’s actually small bits of animation, which is something I haven’t encountered beyond the standard “flip book” style animations in these sort of adult VN’s. While there’s not voice acting (aside from brief points where a character’s name might be said), there is a pretty nice soundtrack – all vaporwave/synth electronica, which I personally found very enjoyable.

The game starts out exceedingly weird, deliberately hiding crucial information from you about literally everything. In a lot of cases, this would be frustrating, but there’s actually plot-related reasons. (Amnesia, which, while flimsy, works as a plot device.) In a nutshell, you’re trying to find the right woman to kill a murderous AI. You talk to all of the women, trying to figure out who is the right choice. At the end of each day, however, you have to make the choice to eliminate one. If it was simply a matter of picking the right one, you could eventually brute force, process of elimination the whole thing, but here’s where the game gets tricky – depending on the order you talk to the women each day, things change. Maybe you learn something that comes in handy when you talk to someone else. Maybe you cause someone to do something that affects the mood or actions of a person you talk to later.
And of course, all of the women have some level of relationship with each other – a pair of lovers, a mother and her daughter, and a sheriff who tries to keep everyone in line. Removing one changes power dynamics, motivations, etc. On your first playthrough, while you might guess at some of the revelations and effects, you’re still likely to be surprised at your unintended consequences. All of the characters are distinct and beautiful, with very different personas that generally avoid too much trope-heavy stuff. It’s worth noting that you play a female character though, so this is pure lesbian/yuri stuff when romance is brought up. That might be a deal breaker for some of you. That being said, you generally can avoid getting too romantic or explicit in most cases, so it’s not being forced on you. But if you HAVE to be male in a game to be able to enjoy it, you’re going to want to pass on this.

At this point, the game ends at Act 3 (out of 5). It leaves me wanting more, and there’s still plenty of questions to be answered. Some of what I’ve guessed at is true, while other things have been a very big surprise. Either way, I’m eager to see this story through to its end. It’s worth noting that this is a single person’s passion project, so progress is slow-going (they have a “real” job in addition to making this game), but highly encouraging. The soundtrack for the game does an excellent job in building the mood of the scenes, which is particularly important in a game without meaningful voice work. It’s worth noting that there’s a decent amount of spelling/grammar errors, but they’re all minor – I never had an issue understanding what was meant. While they detracted, it was never significant enough to really impact my enjoyment of the game.

There’s major replay factor here, even without the story being fully completed, and with the addition of “The Xiao Trials” and “Fantasy Mode”, the sex gets cranked up to 11, giving players who are looking for a more X-rated experience something a bit more familiar. (You definitely want to play through the primary story mode first so you can appreciate these fully, however.) At its current price of $11 USD, it’s a great value. Being early access, however, the price is going to go up when it’s completed and potentially when more content is added. It’s worth noting that the original target was summer of 2021, so there’s at least a bit of concern about the creator hitting targets moving forward, and that’s my only point of hesitation here. However, the creator is fairly good about providing progress updates, and does their best to give quality updates, as opposed to tiny piecemeal upgrades in shorter timeframes. Fans of visual novels and the sci-fi genre as a whole, in addition to fans of high quality adult games should really buy into this one now. You won’t be disappointed.

CLICK HERE to buy Anna The Series Test on Steam