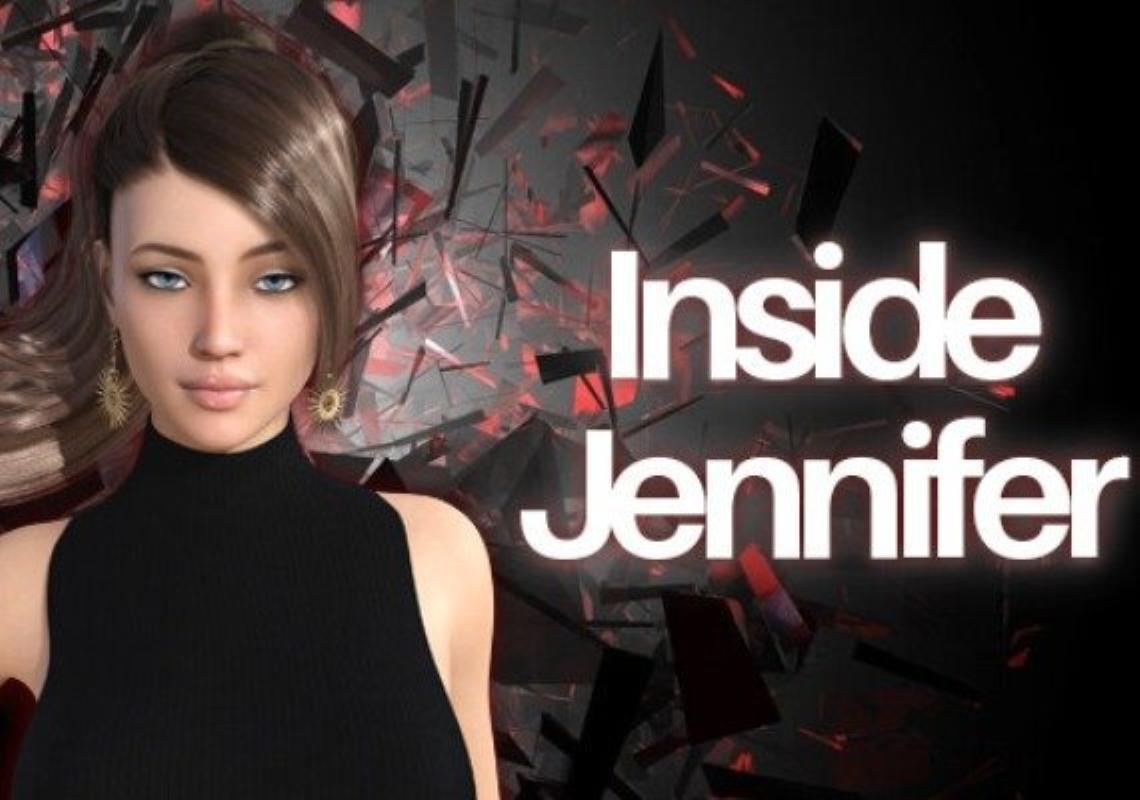 Inside Jennifer is an adult VN with a pretty slick-looking intro, but rather typical CGI visuals and text, likely the sort you’ve seen dozens of times.

You play as the eponymous Jennifer and the writing is…well, it’s acceptable. They’re clearly banking on you caring less about the plot and more about the adult content. My issue here is that they do the whole “choices matter” thing. So if choices matter, I should want to read the story, and it’s just not very good.
It’s tropey, and not in a funny way, but in the lazy kind of way. Every character she encounters wants to hook up with her. Sometimes you can read their thoughts, which make this very clear. Everyone has one primary motivation: to bang Jennifer. Often, Jennifer is thinking about how hot they are, despite supposedly being in a monogamous relationship of four years. Every male looks at her as a piece of meat, and there’s no motivations beyond her looks. Characters ask weirdly invasive questions you’d never ask a stranger, or have plot-convenient knowledge designed to wedge some weird interaction in.

Somehow she ends up working at a college named (sigh) “Cunt-Hunter University”. Yes, you read that right. Because that’s literally a realistic-sounding name, apparently. Look, I’m not trying to nitpick, but that’s just awful writing. It’s not funny; it’s not clever. It’s just “OH LOOK THIS GAME IS ADULT, HEHEHE.”

There’s a sound, voice, and music volume option, but there’s not voicework, music, or sound effects. I’m not sure if this part of the game is broken, or if it’s really, REALLY only used on special occasions. Either way, it kind of continues to make the game feel like a low quality option. I’m genuinely confused at this one.

As the plot progressed, I tried to find a single redeeming character, and there simply are none. There’s a clerk who tries to frame you for shoplifting as a way to force you to strip for him. (That’s not how this works, btw.) The building handyman who literally forces her to take her top off while he jerks off, then bullies her into getting on her knees and talking dirty, THEN shoots a load on her, AND THEN takes a picture of her. All of that? Nonconsensual – you, as the player, have no way to avoid it. Thankfully you CAN fight back and get a measure of revenge, but the scene feels gratuitous and exploitative. Your job interview actually fails if you’re not taking the bait and bending over in front of the dean of (sigh) Cunt-Hunter University.

Every male character is focused on boning Jennifer who often secretly likes it. If they know about her boyfriend, they automatically hate him for existing. And I get it – it’s an adult game. At points, most adult games do something a little contrived to end up in a sexual scenario for the player. But that’s ALL this game consists of; poorly written one-note characters whose motivations are purely caveman-level grunting idiocy in pursuit of pushing you toward a sex scene.

Hell, even the female characters clearly want Jennifer. I’m all for signposting choices in a game like this. It’s helpful to know “make this choice for adult content”. But they have a plot wrapped around the sex. Here, the sex IS the plot, period. I don’t think the developer is trying to remove agency intentionally, or trying to make these characters THAT awful. I think the dev simply couldn’t figure out how to make an adult game without doing these things.

The problem being that removing the agency makes everything feel cheap. It’s less about you playing the role of Jennifer, or directing the action that unfolds. It turns much of the game into you fighting to take the plot in one direction while the game DEMANDS you take it another. For example, at one point, Jennifer met Kelly – who immediately flirts. Jennifer can’t react negatively. In fact, Jennifer likes it. Within a few sentences, Jennifer is said to have “an overwhelming need to be near Kelly”. You are given a binary option, with one clearly leading to sex. It’s worth noting that at the start of the game, Jennifer is monogamous, and in a four year relationship.

Narratively, it doesn’t make sense for Jennifer to want to bang everyone around her, but the game really, REALLY pushes you toward that. It’s much less a case of giving you options, and more a case of trying to force you down the road.

There’s an almost guilty pleasure here, however – this game is a train wreck. I almost feel compelled to continue not because I’m enjoying a story, but to see just how much worse it can get. It’s kind of like a pornographic version of Deadly Premonition, in that regard. It’s bizarre, and full of bad dialogue and awful people, but it’s got this..fascinating quality to it. Kind of like a documentary on circus freaks, where you know you shouldn’t keep looking, but you just want to find out more about the next hideously broken creature on display. If that appeals to you, perhaps the game’s worth it? Not at full price, but on a deep discount perhaps. Just be aware of what you’re getting into. It definitely can get a bit uncomfortable and at times remove your agency to a problematic degree.