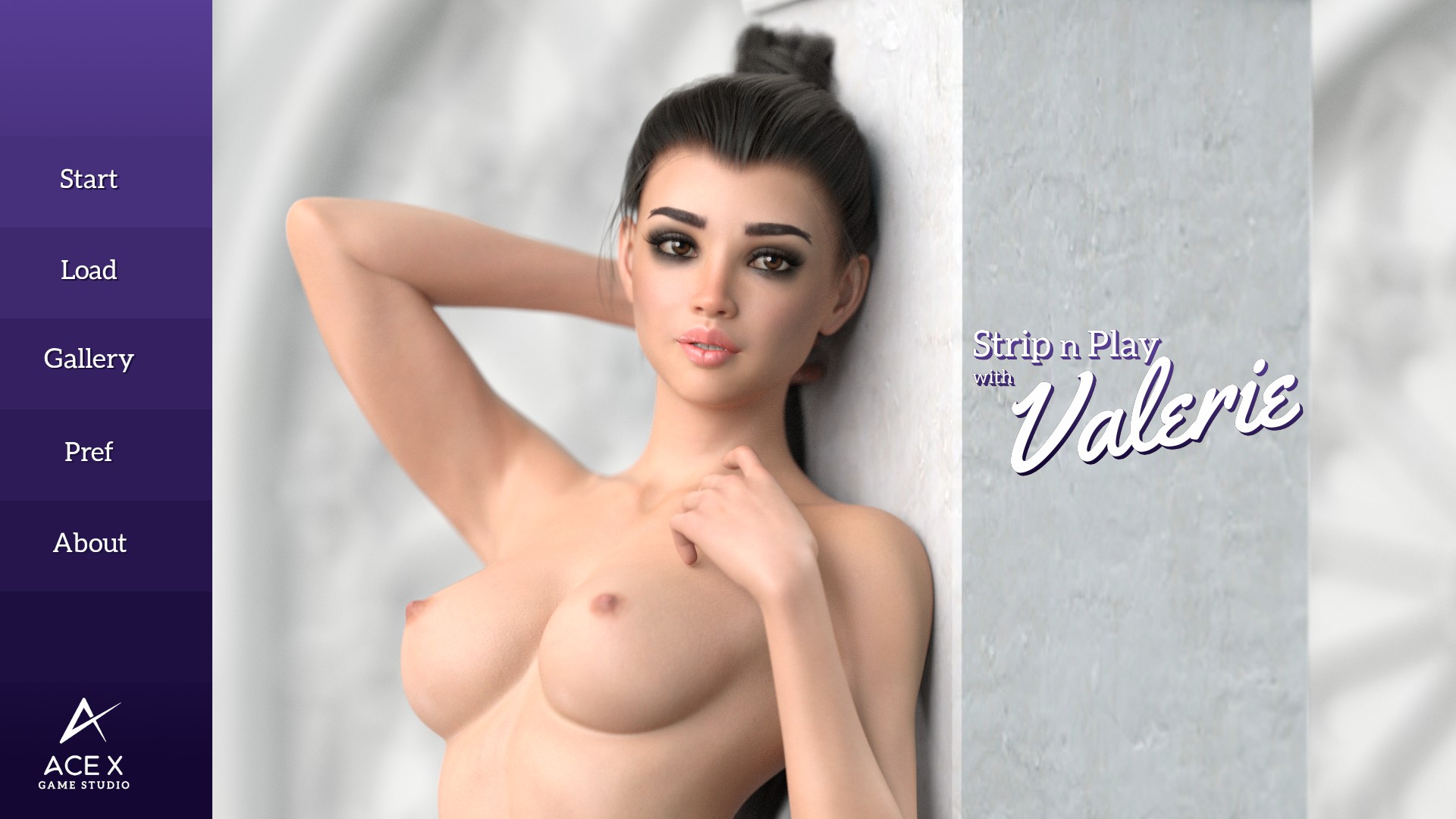 Strip n Play with Valerie is a visual novel-like game that has 4 minigames for the player to choose and play at their own discretion. The goal of the game is to win through the minigames to encourage Valerie to strip and maybe advance to performing sexual acts with her. Although I am giving this a positive review, I consider this one to be a MIXED review because the game does have some good stuff but it’s mired with bugs and clunkiness that hold it back.

Yes, this game has a story to it but I wouldn’t blame you for not knowing because there’s practically no indication for it at the beginning half of the game. It starts off simply with you making her strip then she teases you for a bit. As the game progresses about halfway, Valerie has character development and you’ll learn the reason why she’s doing all of this. At the end, there’s a cliffhanger and it leaves you wanting for more just when the story was gaining traction.

First off, I should note that the game plays out like a Ren’Py visual novel so expect some dialogue choices to be made. The game has two modes: Story Mode which plays exactly like a visual novel with no chance of failing and Game Mode which is where you play the minigames while being at risk of a game over.

As far as I am aware for the Game Mode, each minigame you successfully complete will advance the story as well as award you a “c*m point”. The amount of points you earned will determine how far you get in each session before you ejaculate. It’s okay to blow your load since you’re given the option to continue where you left off at a lower “c*m point” total. Apparently you are supposed to manage these points because there are times in which she’ll want you to c*m with the maximum points but there are moments where you’d want to stay low in order to continue. Take this info with a grain of salt because the game doesn’t explain this very well.

There are four minigames:
1. Puzzle – In this game, you are given disoriented pieces of Valerie and you need to rotate them and put them in the proper spot to create the picture correctly. Timer is really fast here. This is one of the more clunky games because it’s easy to misclick and grab the wrong puzzle piece if you do it too fast. Luckily you can abuse the save/load feature of the game should you fail.

2. Memoria – There are a certain amount of tiles on the board that you need to flip over and match with others to open up the next sexual act. A lot of time and error is involved here as the game doesn’t show you what’s under each tile at the start so you’d have to start guessing. Timer is still fast and you can save/load here if you want to save scum.

3. Sudoku – This is the game with all those squares and numbers. You want to fill in the squares so that each number does not share a column and row with with itself while making sure that each square has all the numbers. This is my favorite one because it starts off pretty easy at 4 numbers while giving you a lot of time. You can also save/load on this game too.

4. Brick – This game has you controlling a flat board with a ball that bounces around the place. The objective is to use the ball to clear out the bricks covering the picture and to reflect the ball towards them. There is no time limit but you’ll fail if the ball goes past the board. This game is clunky in that sometimes the ball just goes through the board at certain angles and the ball’s momentum is very fickle. You cannot save here at all.

I should mention that in Game Mode, your dialogue choices still matter but the dialogue is very cheesy in letting you know which ones to choose. Most of it is asking whether or not you want to continue which should be obvious enough. The other variant is asking if you want to c*m which does lower your c*m points but then you’ll need to play a minigame again to get back to where you were. So that option basically lets you see how you c*m depending on your points so I see no real gameplay value from it. A tip I can probably give you is to go as far as you can then try to continue where you left off to find new things. Also you should not go straight to intercourse unless you want a game over.

Since this seems to be the developer’s first game on Steam, I’ll try to be less stringent and give feedback on things I believe should be improved for the next games in the series.

Even though I have recently listed major flaws with Strip n Play with Valerie, I still feel that the game does deliver well on the sexual content. The [minigames are enough to make the game interactive and fun for it does require you to actually win them. The problem is how very non-user-friendly the game’s HUD and Gallery can be. I also like the option of using the save/load or even the gallery’s cheat option if you want to skip the repetition of minigames.

Ultimately the choice lies in your hands in whether or not you’ll want to purchase the game. I’ll say that the sexual animations barely make up for the game’s clunkiness and I definitely enjoyed it. At the very least, it has more gameplay content than those adult games that basically have you playing a puzzle game and give you only images. So for the developer’s first game on Steam, I’ll give him credit where it’s due and I hope you all have a nice day!

You can purchase Strip n Play with Valerie through the Steam Store page HERE!