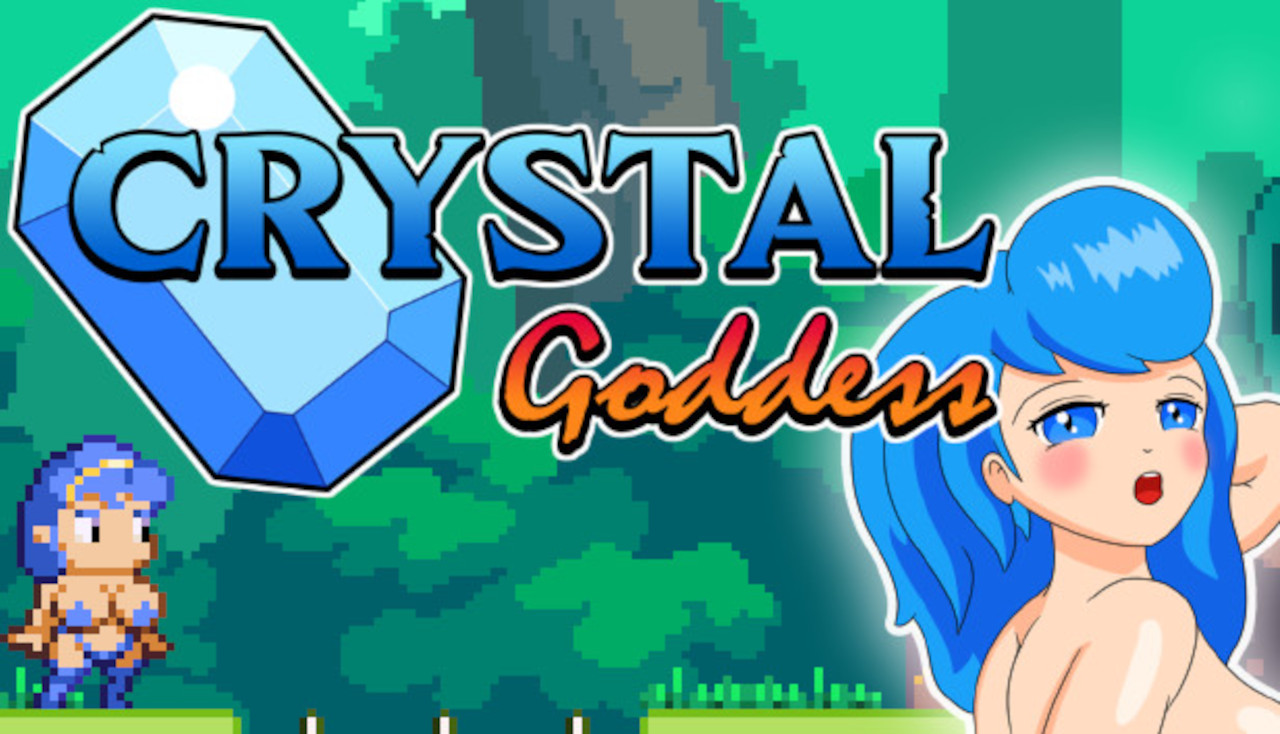 Crystal Goddess is an Adult Platformer where you play a guardian goddess, Azura who after her watch over Emerald Grove, gets her place broken into and her crystals stolen by a rival “goddess” Violet Vixen.

Right off the bat getting the obvious out of the way, as an adult game it is best to just forget that it is one as there’s very very little adult content here apart from the characters sprites (admittedly is small). All the H-related stuff you’ll find here are cards scattered amongst the levels that will show some H-stuff but one that is just photos and isn’t good and on par with the artstyle of the game itself.

As you move through the levels you will fight off a few variations of enemies and avoid their attacks and the traps in your way with your basic attack or with your skill attack that charges over time and will help you in overcoming the various challenges along the way. Enemies will have a chance to drop some items that can heal you should you need it. You’ll encounter friendly characters in need of saving. These characters are portrayed being “trapped” in a sexual act/manner. Rescuing them will give you either healing item or a piece of a heart that once completed will increase your maximum health.

Do You Read Me?

In terms of the gameplay, Crystal Goddess needs some polishing. Even though it is not stated, if you have a controller, use it as you need it. On mouse and keyboard the game is almost unplayable. The red flag shows up the moment you’re in the main menu. Your inputs either don’t register or register very late. Once in game, every movement you input has a second or two delay. As a precision platformer, this is not favourable as you have a small window for mistakes.

Get Used To Handicaps

One may get used to this lag input after some time but from the off it is frustrating as at times you have a small tile you can move on and then also dodge an enemy or a projectile before you have to jump but with this delay, you have to have some “buffer” time before your input is carried out so you either have to be in constant motion or you’ll get hit. And at times you can’t be in constant motion as you would have to wait for the right time to carry out that action.

With a controller fortunately, there isn’t a problem weirdly enough and it plays as it should. No delay and everything feeling immediate and crisp. That is till you realise that your hit box is bigger than your character sprite and some encounters seem to not have a way out of the way to avoid dying. So having an almost full health for boss fights especially is a must.

Crystal Goddess is a missed opportunity for an adult centered platformer that is bogged down by its inconsistencies in it’s gameplay, controls & lack of juicy bits that it clearly has potential for, which is a shame as it is visually a good looking game. Too bad it does not play as well as it should for now. Hopefully this get’s the care and polishing it needs to tighten things up eventually.