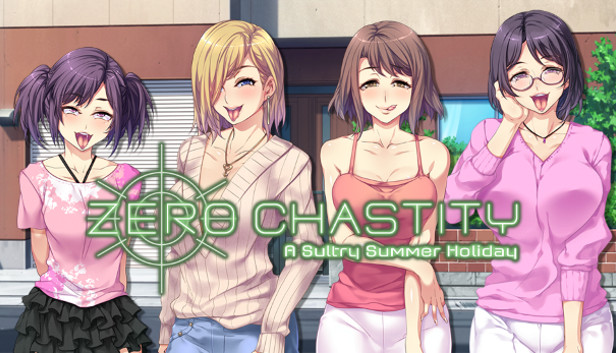 Zero Chastity is a story of an inexperienced protagonist who is staying with a family friend and her daughters in hopes of being accepted into his school of choice. It becomes quickly apparent that these women cannot contain themselves at the sight of someone of the opposing gender in close proximity. It gets steamy rather quickly, with oh so subtle twists such as “does your tummy hurt? let me pull your pants off and fix that!” and “oh was I rubbing myself against that furniture? ooopsie!”… don’t expect kamige levels of writing here. Its a means to an end, my friend.

I highly recommend headphones, as this game has some pretty detailed sound effects. Aside from the constant moaning, the scenes are so over the top that it sounds like bananas are being continually squished in my ear. Super gross, but its par for the course for an Orcsoft title. Their signature o-mouths and weird tongues are back too which I don’t quite care for, as the girls can look somewhat alien-like at times.

I did experience some weirdness that the developers didn’t write into the script, like an exit dialog that isn’t visible in full screen and slider bars that don’t all work. As hard as I tried, I couldn’t change the text speed and some volume sliders also seemed broken.

For what it is, Zero Chastity does it well. There are a lot of scenes, and once viewed any of them can be played from the main menu. There is no censorship here at all, this is fully de-mosaiced. Minor annoyances aside, I’d say this is one of the better adult titles on Steam if you’re looking for something that goes all out.