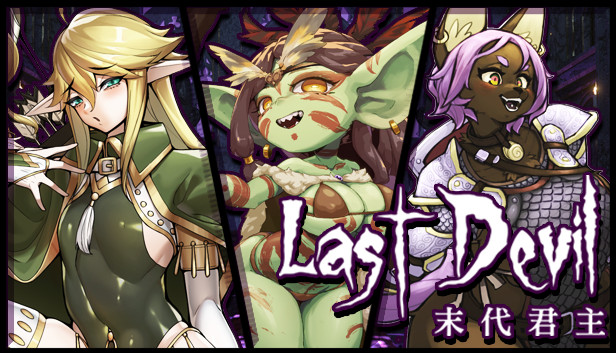 Last Devil is a lewd rogue-lite/rpg hybrid. Right off the bat, I noticed there are very few options available. I was unable to get the game to run in any form of full screen, and the only controls available are a mouse/keyboard combo. I also couldn’t find a way to exit the game from its menu which feels like an oversight.

After jumping in, the movement and combat felt just a bit off. The game would slow down if there was too much going on at once, and the combat (which seems to be only ranged combat, no melee) feels somewhat unpolished. Keeping in mind that this title is in early access, I continued.

There are two ways to upgrade your character – permanent upgrades purchased with currency earned after each run, and item drops that disappear on death. The permanent upgrades are mainly stat increases, and the equipment can upgrade stats or change the way you deal damage. By the end of my second run, I was shooting six fireballs at once that had lifesteal, a chance to paralyze, poison over time, knockback, and a few other fun upgrades. Certain upgrade combinations really make you feel overpowered, yet combat is never trivial. The bosses are interesting and unique, and I ended up enjoying myself much more than I originally anticipated.

Upon death, you upgrade your character and try again. With each run I felt significantly more powerful, which made the grinding worthwhile.

The pixel art is well done. While the UI as a whole could use some fine tuning, it still looks good. This is another area that just needs some polish as development continues.

The lewd scenes are unlocked as you progress. There aren’t many yet, and they will take some grinding to earn. Some show up after beating a certain area, others are unlocked using affection points which you gain from item drops. The scenes are nicely drawn, but instead of being animated they just alternate between three static images. Despite this fact, they aren’t bad.

As a whole, I would recommend Last Devil with the hope that its rough edges will be smoothed out. As it currently stands, the gameplay loop is satisfying and the additional scenes are a nice bonus.