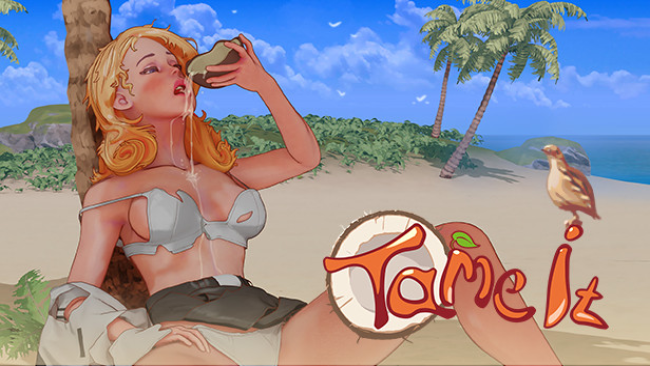 Tame It! Is an adult Point & Click, Survival, Dating Sim game that has you play Lee, who is supposedly flying to Bahamas for a new job. However, that all changed after your flight took off to the mile high club and flew into the pilot as she struggled to get grips with your flight stick and accidentally cut short the climax and brought the plane down.

As you try to survive on the island and find the pilot Tonya, the game introduces its simple to digest survival mechanics that will have you gather resources for food, water, tools and also to build structures. You can eat off the land with foods you forage or do one better and combine it with other stuff to cook full meals that will satiate your hunger and thirst more. The game does well at introducing stuff that you can make as the story beats help unlock more of the crafting recipes after you’ve met certain requirements.

After you’ve met the requirements to have a decent roof over your head the story will slowly unfold by introducing you to new characters. As the title of the game suggests, these new characters won’t be so friendly and will start off close to being hostile towards you. From then on the dating sim element kicks in as you try to figure out how to win them over not with verbal communication but rather with your actions as you try to win their trust and get closer to them.

As a point & click game, the puzzles are rather simple and not frustrating for casual players. The array of minigames, though simple in nature, are interesting. Mini games from hunting for food, fishing, to finding behind which bush a character is hiding behind, to teaching a character how to communicate, it has a wide selection of variety. At most times the game does well at showing you the tools you have and leaving you to figure out how the minigames work.

Some caveats include the lack of a quest or objective tab which would help remind you on what you need to be doing if you forgot or missed the dialogue. During the early section of the game you will start to notice the grindy nature of it as you go through day by day solely gathering resources and crafting items without any story progression until the objective is met.

With those caveats, Tame It! Is still enjoyable, the story as cliche as it can be is still somewhat amusing. The characters are likable and have some decent time to be fleshed out (figuratively and literally), the art style is decent and slightly different from the usual types of this genre of adult centric game. What is missing for that aspect is the gallery aspect to replay the lewd scenes which might be a bummer for some. All the small positive parts help forge an enjoyable game that is easily recommendable.

Purchase Tame It! on Steam!