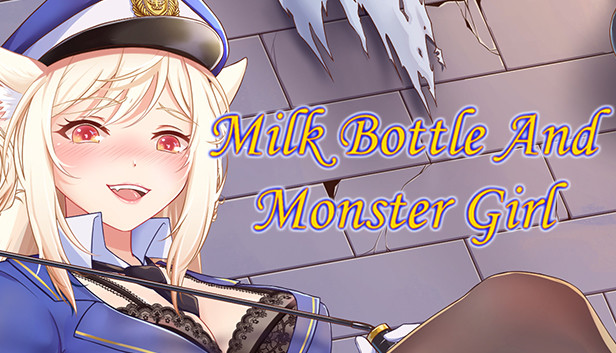 Milk Bottle And Monster Girl is a short casual shooter with or without adult theme depending on the player.
After a mysterious Eye of the Void opens up, which releases monsters onto the Holy City, capital of Ephelia and sends the city into chaos. A holy weapon, The Milk Bottle is activated as a result and the Queen bestows the weapon to you to fight off the monster invasion. You heard that right. As far as the story goes, that is where it began and ends.

The gameplay is simple in a sense that every level consists of 5 monsters, all you have to do is with your Milk Bottle, shoot 5 targets, which is the spawn point for each monster while dodging the monsters who would bounce around the level and each other. If a monster hits you, that’s game over for the level and you would have to restart. With each level, every target you have to shoot at increases its hitpoints. With a total of 15 levels, the game can be completed within 30 minutes.

Every level is represented with a girl with their own backstory and how they relate to the Holy City, each other and so on. As the level begins most levels will have pictures of the girl of the level in the background, however some levels do not for some weird reason. Each level is unlocked after you have completed the previous level. Difficulty-wise the game is easy, all you have to do is vaguely observe which monster is “tankier” than the rest to see which monster will bounce off in the opposite direction after hitting another one and which will continue its trajectory.

Thoughts
The game itself is fun enough for it’s short duration, with its difficulty being bare minimum so it is fine if you’re just feeling like picking up a cheap game for less than 30 minutes. The artstyle is good as a whole but the voice acting is questionable. The main issue which is not all biggy is the translation. Some spelling mistakes such as Milk Bottle is typed “Miuke bottle” and mostly the sentencing in the story is off but that’s about it.